Ateliers Fourwinds was established in 1994 and is the realization of a similar vision seen by Canadian Sculptor, Ursula Hanes S.S.C., R.C.A. and Amerindian Artist, Donni Buffalo Dog.

The goal at Fourwinds is to offer both established and emerging artists, as well as students, flexible studio facilities, creative dialogue, a refreshing amount of solitude and a group that recognizes the value of creative endeavor.

It provides a place for artists to work together separately for whatever reason they have chosen to come. It also serves as a place where ‘difference’, whether of nationality, ethnic group, race, social standing, creative or any other, is not only accepted but supported and nurtured.

Ursula Hanes and Donni Buffalo Dog discover La Julière, a quail farm with lodgings lost in a sea of olive trees at the foothills of the Alpilles, and see immediately its potential: four large studios in the enormous barn and a home in Provence! They also feel this quiet and peaceful location could be their dream one offering a « Protective Place » where artists, including themselves of course, would work freely, without interruption and informed by the beautiful surroundings. They buy La Julière, register the Ateliers Fourwinds as a non for profit association, and begin cleaning up the place!

Initially, the ateliers offered ongoing classes in sculpture, painting, life drawing, etching and stainglass provided by local and permanent artists and exhibitions were held at the end of the teaching season towards the end of May. From 1997  however, Fourwinds expanded its program to become a residential art centre receiving artists from all over the world in the spring to fall months. In the summer months, workshops or master classes are sometimes available in certain specialities as: bronze foundry techniques, printmaking, plaster casting, etc. By the year 2000, however, Ursula and Donni had run out of their savings and, had it not been for the financial help of Lynda Martin, a student they met when she attended a watercolour workshop, their dream might have turned to dust. Lynda’s foundation purchased the property in 2001, improved it wonderfully – enlarged the self-catering flat, adding more chalets for residents and  the swimming pool- and covered all the running costs of the association in the next 14 years. Although this full support has now converted into helping the next team taking over the property, gratitude is always here… and so are the Ateliers!

2014 – from the bush to Aureille Under Ursula’s impulsion, the Ateliers develop a new connection with Still @ the Centre, Byron Bay’s centre for the Arts in NSW, Australia, directed by an Arlesian-Australian couple Sabine & Vianney Pinon. Both have been involved with Fourwinds since its inception and are now active partners.

The team, Jeanne Amoore, Ursula Hanes, Sabine and Vianney Pinon… invite you to join them for a class, a workshop or a longer stay at the Ateliers Fourwinds. 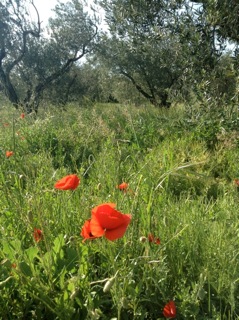