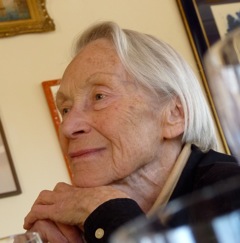 Born in Canada in 1932, Ursula was educated primarily in Cambridge, England where she obtained the Diploma of Arts and Crafts at the Cambridge School of Art which qualified her to teach. But, deciding to specialize in sculpture, she continued her studies at St. Martin’s School in London, then at the Art Students League and Columbia University in New York before returning to Europe for a year of work in Italy based at the British School in Rome.

Quickly recognized for her monumental sculpture and her portrait busts upon her return to Toronto, Ursula was elected to the Sculpture Society of Canada (later serving as president of the organization) and the Royal Canadian Academy of the Arts.

Major influences in her life were sculptors William Zorach of New York, and Henry Moore, with whom she remained in contact until the end of his life.

A yearning for travel has given her vast experience throughout North America, North and West Africa, and Europe where she now makes her home in the village of Aureille near Arles in the south of France and co-founded the Ateliers Fourwinds.

« Ursula’s work is based neither on a specific style nor a specific research. She works with that which moves her… whenever it moves her. Throughout the years, these themes have taken her from a figurative style into a far-reaching abstract one. Her inspiring work method and her personal drive are clearly experienced through these intense images. The human body is a continuous theme throughout all of her sculpture. This is seen as a symbol of fertility, a place of shelter or as a receiving ‘portal’: a physical shape that can feel pain… and also love. The bodies often appear as mountains, organic shapes that remind us of the beginning of time.

The skeletons or boney shapes she creates are quite different in strength and perception. Ursula works with such precision that the shapes she models have an almost painful rawness about them. Bones normally support the entire human body, but in her sculpture, even a backbone can protude. Bodies appear inside out, their vulnerability explicitly visible. Her ‘portals’ have protective shapes. We feel embraced, sensing an abstract hug simply because the space is filled with air and only exists in our imagination.

Her work is the story of her life, driven by the universal need to make sculpture. Her stories are like myths. They have universal meaning because of the magical shapes and the feeling of love and sadness which they arouse. Her art is intriguing, inspired by life itself and the people around her. » 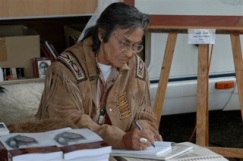 Donni, a half-blood Amerindian, was born in 1931. She is self-taught in every field of her endeavor and, after trying many different jobs including 25 years of operating canine centers in California, she found that it was Fine Art that provided the intimate expression of her most sensitive reactions.

Her work demonstrates her rejection of artificial standards and identifies her with a curious blend of mystical idealism and traditional realism which in many ways reflects her Indian heritage. Indisputably present in her pieces are traces of an ancient form that shows a people of keen observation in harmony with the natural world which surrounds them.

BUFFALO DOG’s career as an artist cannot be fitted into a traditional category. Whether in her drawings, sculpture, the occasional etching, or her novels, she makes a point of safeguarding her elusive personality from the influences that tend to blur individuality.

The elegance of her pieces and the quiet sureness of her touch speak of a devotion to all that is noble and commands respect as it is the spiritualization of the natural world and the tribal peoples that once inhabited it that are chief concern of this most unusual artist. 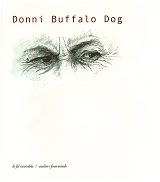 All of Ursula and Donni’s books & catalogues are available. Please send us an email for details of prices and shipping. Thank you.